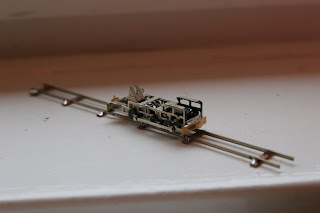 The Baldwin 50HP Gas Mechanical I was expecting turned up at Christmas. It's a Meridian Models kit that folds up from Brass and Nickel Silver with the usual wheels, axles and brass and whitemetal castings and the like. The picture below shows how the Chassis comes together. It's a bit odd in having 2 nickel silver frames, each folded up to make 3 sided U sections. The first is the outer frame which folds together to make the 2 side frames and the top of the chassis you can see in the picture below. At this point you solder in the brass axle bearings and insert the wheelset. After this you make another similar fold that creates 2 further side frames and the bottom with the sides fitting inside the ones you have already made. This is then slid up inside the existing chassis you've folded up. Not easy to explain but it means you need to fit it up with the sides fitting between the outer-sides with the bearings and the wheels themselves - very tight clearances but a very solid chassis afterwards. 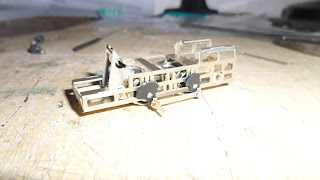 Drive is through the rear axle, transferred to the other axle and the jackshaft through the cranks. Quartering is relatively straightforward if you follow the instructions doing them all in order but you could spend forever making small adjustments trying to make it smoother. The brass body fits over the top of the motor making it a bit snug. I though I was going to have to put the docoder in the cab, which would have been a pig to conceal. However, by cutting down the whitemetal gearbox casting at the front over the jackshaft and trimming back as much of the sheath of a Digitrax DZ125, I've managed to fit it in under the front 'bonnet' - which hadn't been fitted in this photo. 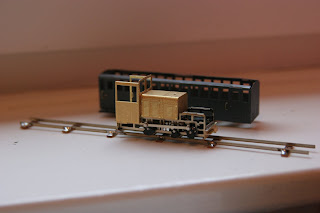 After all that, it actually ran! A real emotional moment as this is the first kit I've got from etches to that point. At the head of a train I think it looks great. It's almost a shame that on the actual layout it'll just be used to shunt from the quarry branch to the station but I'm sure I'll let it get a run every once in a while! 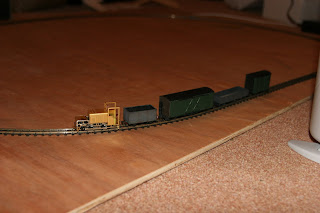 I did, however, learn a few lessons:
Posted by Graham at 11:22 No comments:

Well, I've now got my computer back up and running so time for some updates. I know that this cold weather has been causing a load of problems with the mail and roads and the like but I hadn't thought that it would cause issues with the railway. Well I was wrong. The wood glue on the new part of the layout has set a bit oddly - rather like plaster. Being a bloke I only read the instructions afterwards and it turns out it needs to be above 5 degrees to cure properly - and it really wasn't.

In fact the cold temperatures caused problems with my airbrushing plans too. Just after I got my new spray-booth set up it got so cold in the garage that I couldn't hold the airbrush for long and the cleaner froze in the pot! That said I did get some airbrushing done and I love the smooth finish. Moel Tryfan has been sprayed in a nice maroon colour and I've now started to line it. This is my first proper effort at lining with a bow pen but I think it's going ok so far. It's putting the black line down the middle of the yellow that will be the struggle. Here she is along with the tools for the task. A very fine paintbrush and some turps are the secret as you can tidy up rough edges after it goes wrong! 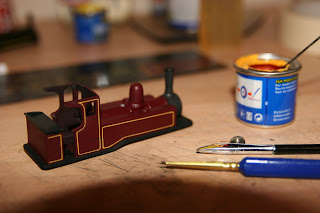 These two coaches have been sprayed in etch primer and then given a basecoat of grey. I stuck bits of cardboard to the bottom using little foam self-adhesive tabs designed for photo mounting and the like. It means that I can pick them up and move them around without fear of affecting the finish. They'll pick up a coat of Midland Red of some form in the not-too-distant future and then they'll gain handles, windows and transfers. Does anyone have experience of DIY transfers as I don't know of any commercially available NWNGR coach transfers? 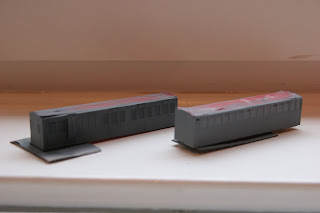 One bit of stock that is a bit more progressed is one of the workmen's carriages. I'm leaving this in the flat grey that the NWNGR used for a while after the First War as an austerity measure. As I had the grey paint out this was done before the world froze over! 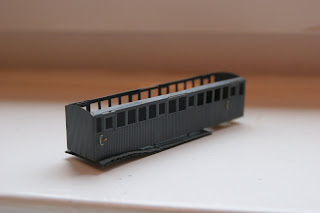 I'm hoping that the garage will become a more tempting place soon but the fresh snowfall today suggests that I might be a bit over-optimistic!
Happy New Year to one and all.
Posted by Graham at 17:35 No comments:

Following from lest weekend playing trains, I've been back at the model again this weekend. I did some more work on Moel Tryfan and thought I'd make some progress by spraying it and Russell in primer. First spray went well but then the second just spluttered a bit and turned it into that awful orange peel texture on the surface. Thankfully they're both soldered together so the paint stripper can come out again and take them back to metal. However I bought some paints last weekend so thought I'd use it as an opportunity to see how they look, so here they are. 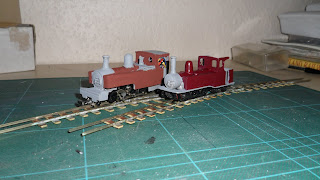 Moel Tryfan is in Midland red which is supposed to be the correct colour for an ex-shop loco. Russell is in a dark brick red which is what the paint was reported to fade to relatively quickly. The brick red isn't quite as pale as the camera flash has made it look but I still find it a bit weak. I may use it with some varnish on some coaching stock but I think I may mix it with some of the Midland red to get a slightl less vibrant colour for some of the loco stock.
I also spent a bit of time completing a covered van and putting together a Parkside kit of a Pickering Brake Composite. I have to say I've been a bit disappointed by this kit as it is purely the sides and ends and some plasticard for a floor and roof. I wasn't expecting to have to create an underframe for it so now I'll have to sort out some I beam sections for the solebars and something for the truss rods. If I'd known it before I would just have gone fro some Worsley sides but you live and learn. 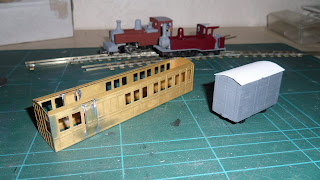 Well, it's been a very railway-focussed weekend. I made it to ExpoNG on Saturday which was as good as ever. Not as many layouts as I remember from the past but more than enough traders to throw my money at - a 50HP Baldwin Gas Mechanical should be appearing beneath the Christmas tree this year!

More impressively though was the first outing of Colin Lea's Rhyd Ddu. I've been following it's build on his blog for the last few years and I'd been really impressed by the way it looked in photos. However it was even better in the flesh. Too many layouts I've seen pictures of seem to end up as less than the sum of their parts but Rhyd Ddu was quite the opposite. Here's a picture of Colin hard at work. 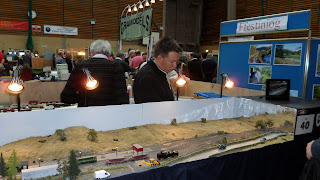 Apart from that I spent a day actually operating a layout at an exhibition. Batcombe is
a relatively straightforward OO BR southern region terminus owned by a friend of my dad. It was straightforward and really enjoyable although the exhibition was a bit more modest than ExpoNG being in the Woodchurch Memorial Hall in Kent where we were trying to raise money for their roof fund. 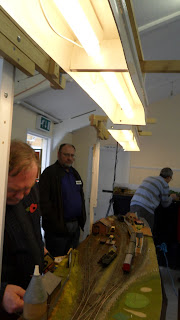 We may have been quite modest but one participant - The Gresley Beat - wasn't. A 32' long model of the Kings Cross Top Shed area filled the main hall on its own - we were definitely playing second fiddle. Here's a pic that doesn't even start to do it justice. 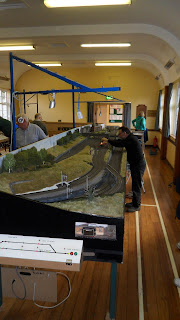 And finally there is, of course, my own layout. I've been relearning a lot of lessons that I'd forgotten during my lay off. Trying to make this double curved turnout was certainly challenging my ability and patience but I seem to be getting over the hump with it. I've got some alignment dowels and traverser rails in the post so hopefully I'll be able to get a few boards together and actually run some trains. 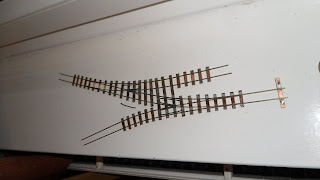 Ok, well this biggest change will make some of you happy going by previous posts. I've made the switch to DCC. With a Prodigy Advance and a couple of Digitrax DZ125s I've been able to run Russell and Moel Tryfan on the test track. Slow running is truly excellent although I'm struggling to get my head round deceleration CVs. Moel Tryfan seems to either come to a dead stop or carry on like a greased weasel on a ski slope!

Aside from that I've started to put together another Parkside NWNGR Workmans' Carriage. I think the can of grey primer will have to come out soon. Break it down and build it up

Well, it's amazing what 15 minutes and a jar of paint stripper will do. Russell was pretty soon down to its component parts. I found it quite intriguing watching all the previous liveries come through as each layer was stripped back. 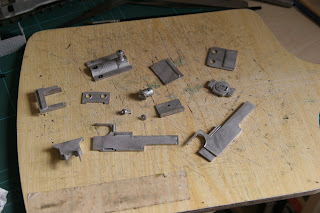 But that was the easy bit! But it's not a complex kit so, after about an hour with a soldering iron, most of the kit was back together again. Even better it was back together in much better condition than when I first built it over 10 years ago. I think I must have chucked it together with superglue in about 5 minutes flat. This time it's all square, well held together, and without all the odd little gaps that were in it before. 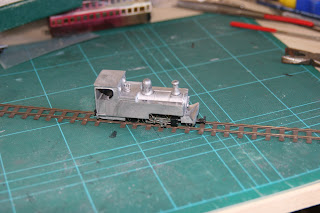 OK, so I might have been quiet for a little while but that's because, well, I haven't done anything. No real excuses but after a few months in Iraq with work and a house move I just sort of drifted away from modelling for a bit but no more.

The odd thing is that when I start digging my stuff out I couldn't quite remember where I'd got with everything. As a result the first stage was a bit of housekeeping with the paint stripper and cellulose thinners. So the airbrush is now working, teh Chivers Russell is now in its component parts, and some older kits are being reviewed. Hopefully I'll be able to come up with a proper plan of action soon and there'll be some visible progress to stick up here!
Posted by Graham at 09:03 No comments: